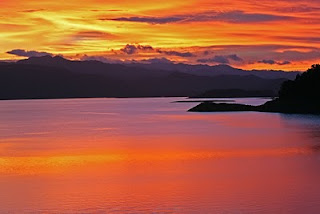 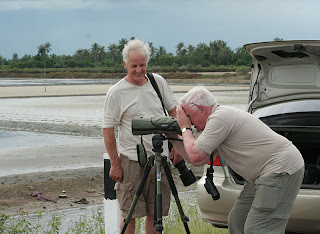 John and Gordon from Scotland did a short stop over on their way to Australia.
The goal was to see as many birds as possible in a gentle but steady pace.
J and G had never visited SEA before.

We played things by ear and visited several sites.

Someone had recently seen an over summering Spoon-billed Sandpiper here. When we got there it was low tide which meant birds had left for the mudflats.
The good news is that an extensive cemented boardwalk has now been put up at the mangroves and one can view the birds pretty good through a scope out there.
There were thousands of birds and with so many birds around and the waters retreating we had little chance of finding the Sandpiper. Still, for John and Gordon it meant some new waders: Red-necked Stint, Long-toed Stint, Lesser Sand Plover, Broad-billed Sandpiper being a few.

This is an excellent site for River Lapwing and Rain Quail.
We did get there a bit late and didn’t see the quail but we did get cracking views of the Lapwings and picked up many other open area birds.

This mangrove research station is always full of birds. We got there late but revisited later in the afternoon. Many Pin-tailed Snipes were in full view at the experimental reed beds. 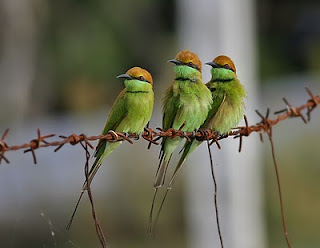 Several pair of Malaysian Plovers and 7 Pacific Reef Egrets. Too early for White-faced Plover and Chinese Egret.
A surprise was a Stork-billed Kingfisher in the mangroves on the way back.

Ba Aek (Auntie Aek) is the name of the lady that for years have fed and kept an eye on birds on her property adjacent to forest covered hills.
We avoided rain and had a fabulous morning in her garden. Kalij Pheasent, Lesser and Greater Necklaced Laughingthrushes, Green-eared Barbet, Common Flameback,
Orange-breasted Flowerpecker, Yellow-vented Flowerpecker, Vinous-breasted Starlings, Banded Bay Cuckoo and Vernal Hanging Parakeets were some of the birds seen. 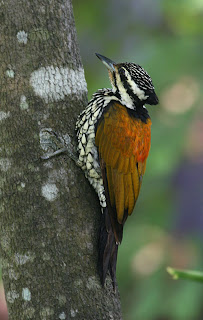 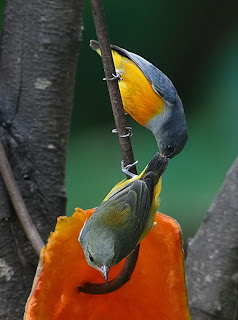 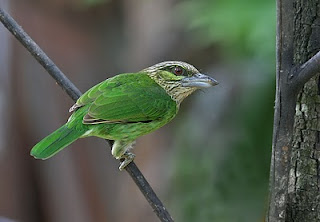 This excellent resort has many interesting birds on the grounds besides good food and a bird feeder at the restaurant. The owner: Khun Gun is a keen photographer as well and information about local conditions can always be shared.

John and George wanted an extension after the 2 days and so we visited a few sites in and around Bangkok. 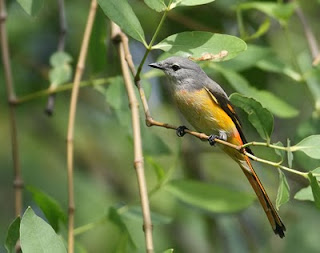 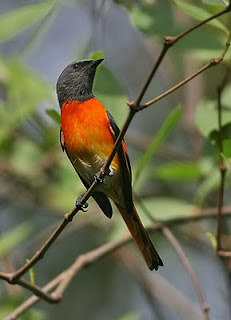 This site is known for the big numbers of over wintering Brown-headed Gulls. The gulls haven’t arrived yet and we mainly went there for lunch and taking in the atmosphere. Some Blue-tailed Bee-eaters were probably the highlight in the pressing heat.

We spend only one hour here as it was midday but got all the target birds except for Striated Warbler that wasn’t calling: White-browed Crake and Bronze-winged and Pheasant-tailed Jacanas. 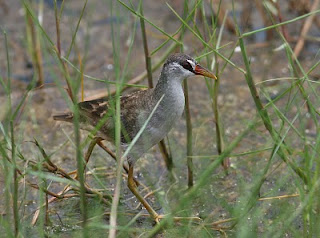 I then dropped off the Scots at the airport. I must say it was a very well spent time for them with loads of birds, good food, good transport, good weather as well as getting a touch of the local people and Thai culture.

Did an add-on morning at Suan Luang, Bangpoo and Muang Boran….stopped at 14:00. Some additional sightings:

Martin Daniel was on a business trip to Vietnam and decided to stop over in Bangkok
on his way home to England. Since this was Martin’s 12th trip with me in the field there were quite a narrow set of target birds. 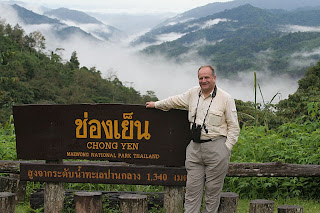 We decided to spend the time at Mae Wong National Park some 5 hours drive North West of Bangkok. This area is part of the Western Thailand Forest Complex which stretches over a huge area.
The site is the best in the country for Rufous-necked Hornbills, Burmese Yuhinna,
Coral-billed Scimitar Babbler, White-necked Laughingthrushes and White-throated
Bulbul. Of these Martin had only seen the Hornbill.
The prime birding area is at Chong Yen which is located 1340m above sea level. Here
is a campground overlooking a forest covered valley. Main drawback with the site is
the abundance of sand flies that can be quite a bother.
Since September is right in the rain season it was a bit of a gamble to visit. Sure
enough, we had plenty of scattered showers on our way to and up the mountain but
once up we hardly felt any rain.
Best birds seen was easily a flock of 3-4 Coral-billed Scimitar Babblers right next to the roadside. Martin was elated to see these, to be, only lifers for the trip.
The bright red bill add to the birds make up which along with typical foraging
behavior of the Scimitar-Babbler make them a very attractive bird.
We also had prolonged views of a lovely White-browed Piculet feeding in bamboo. 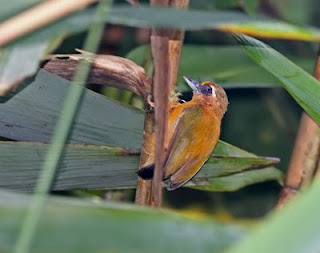 A couple of birdwaves kept us busy and a Chestnut-fronted Shrike Babbler stood out
with its attractive plumage.
We spend from 2-6pm and 6:30-14:00pm at Chong Yen. 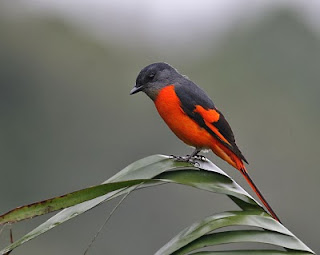 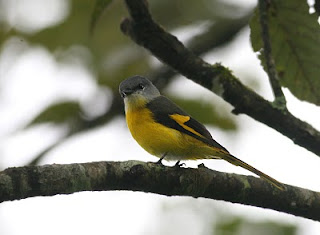 The male White-browed Shrike Babbler is a favorite of mine and a true indication that one is on higher ground. 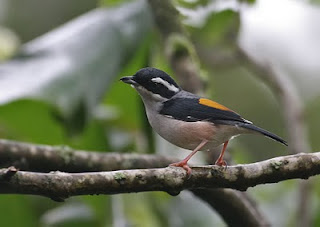 For 9 months of the year one neither see nor hear the Rain Quail. Then during 3 months of the wet season the loud and far reaching 'clink clink' can be heard in suitable habitat such as at Huay Mai Taeng, Ratchaburi. In the grass lands and scrub near the large dam these little birds are commonly found. Their calls are hard to pin point from where it originates. I found the best way was to drive around in the grass lands by car. Normally they aren't seen well as they seem to stay within the thicket of the scrub or grasses. But as the mating season draws near they start calling and proclaiming their territory. This is best done from a rock where the male will belt out his song. They were surprisingly approachable with the car. Perhaps too occupied finding or calling their mates? And this is how I got these images. The week earlier I had seen them only on foot and through a scope but this time Carl-Johan Svensson came along and with the help of his high clearing vehicle we were able to 'get the job done'. 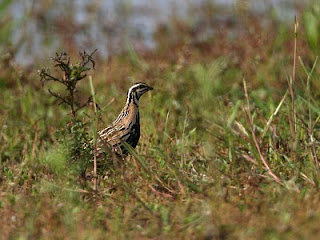 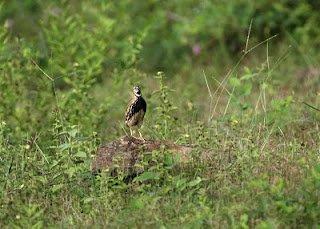 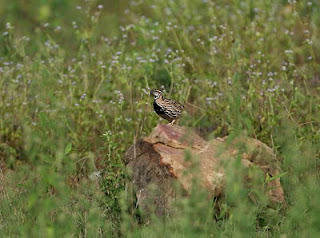 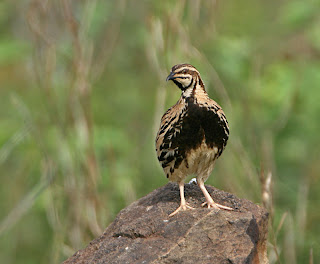 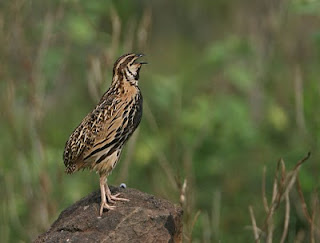