A year ago I twice visited Kaengkrachan specifically to try to see White-fronted Scops Owl,  a sought after bird with a restricted range.

On both occasions there were 4 of us with torches surrounding the calling owl for a couple of hours only to walk away  empty handed.

(The problem with Kaengkrachan and owling is that one has to stay over night  at the campground and thus ‘missing out on yummie Thai food and drinks after a long days birding. Most folks I assist in the field opt for the comfort of the hotel (and air-con) as opposed to the hard ground inside a tent. )

I arrived at the park at 4 pm.  I had seen a number of pictures of the WFSO posted on Thai websites of late and knew there was a known day roost around the 1st stream.

The 3 hour drive to the park I spent contemplating all the little details that had to come together for the ‘miracle’ to happen.  I felt a bit helpless and  in the end simply decided to take it to the Lord in prayer: ‘Dear Lord,  please make things happen, make it flow, make it easy!’

Once at the spot there were a few guys there already and it didn’t take more than a minute before I laid eyes on  2 birds roosting next to each other in the thick foliage. Finally, my desire was granted!

I hung around for some time and by 5:30 the birds moved to a clean branch but still in the dark. However, this made better opportunity  for some shots of the whole bird.

Feeling quite satisfied I went back to the campground and set up my tent.  Next  to come was regular owling.  Weather was a little gloomy and no owls calling. I started playing a number of calls, mainly Brown Hawk Owl ( I need a picture) and Oriental Bay Owl. The latter a bird every birder wants to see and though it is wide spread in the region, still hard to see.  Here in Thailand most people see it in the South but for some reason I had never really had a chance to give it a proper try.

Then the owls started calling, first Collared Scops Owl. Not too hard to see but not a priority. Then WFSC with its low ‘rumbling  motorbike’ call. Well, I had seen it, so no need to go after that one again.

Then Oriental Bay Owl started calling and not too far away. Very encouraging!  I kept using playback and soon realized I had to abandon all reason and crash into the dark jungle.

I remembered how Dave Farrow finally got it as a lifer a couple of months back in the same place and how he said he had to ‘go after it’. I had also met Hans Metheve who said the same so I knew I had no choice but to face my fears and ‘do the walk’.

There are elephants in this area as well as leopards, snakes  and the occasional tiger so it can get a little eerie in the dark.

Anyhow, armed with my flashlight I made it across the stream , found the trail and started walking. The call was coming closer and closer, good sign, then when I was about 10 m from the bird, my flash light started blinking. ‘Oh, no, batteries are dying’…..had to let go of the bird before the batteries went dead and soon found myself back at campground.  Here I met Puwish Lenwaree  and his wife.  Puwish  is a very keen bird photographer who has been practically everywhere in Thailand  with his camera. I told him about the owl and he said ‘I have been trying this one for a long long time’.  So, since he had a couple of torches the 3 of us went back in.

Once we had made it near the bird it was a matter of finding its perch. One time the bird actually flew so close to my head that I could feel its wings almost touching  my ear.  Eventually, we saw it and got to enjoy prolonged views of this totally awesome bird.

During the whole encounter it kept swaying its head sideways, something I captured on video.

What a day it had been!

The night was rather tortuous as it was very hot and humid. Laying there dripping in sweat I kept telling myself ‘it was worth it all’!

Morning chorus began at 5:30….I got up quickly, grabbed a coffee and walked around (yes, I did shower).  I then spent the day sort of relaxing but with the goal of seeing Ferruginous Wood Partridges, a bird that had eluded me for so long.

Finally at around 16:00 a pair of Partridges shot across the trail like rockets. Their striking color clearly giving them away. They didn’t go far and for the next half hour a duet between my Ipod and the birds took place. They never came in full view but I did see one of their heads bobbing behind a fallen tree trunk. Good enough encounter for a ‘tick’ but still in need of more satisfying views.

So, some exciting 24 hours it had been! 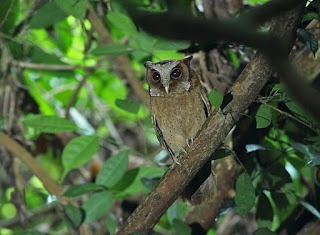 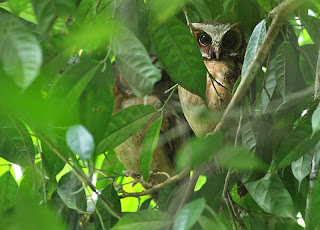 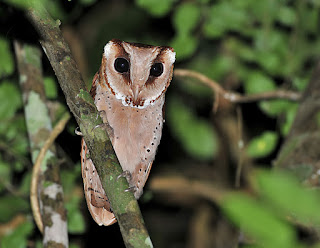 Though I have lived in Thailand for 30 years I have yet to visit the Philippines.
Thus it seemed appropriate to visit some friends and go for a short vacation before the new school year began here in Thailand.

We flew with Kuwait Airways to Manila where we boarded a plane with Cebu Pacific Air to Cebu.
It is possible to fly strait to Bohol but somehow we got it wrong.  Spent the night with friends  and then took a boat to Bohol (2 hours) the next morning.

Saw no birds on the journey but  several Whiskered Terns at the port of Tagbilaran, Bohol.
A friend waited for us and off we went to their abode on Panglao Island just south of Bohol.

The next few days we based out of here in a rural rather laid back surrounding.  It reminded me of Southern Thailand very much.  Around my friends house amongst the coconut trees and scrub I connected with the more common birds whereof many were the same as back home.  The most interesting ones were a couple of endemics: Red-striped Flowerpecker and Philippine Bulbul, the latter with a range of musical and high pitched sounds.

Philippine Coucal was common in the area but hard to see.  On my last evening I heard a Philippine Nightjar outside the house and managed to get the torch on the bird. I also heard Hooded Pitta one morning.

We visited Balisacag island on two occasions. Some very nice snorkeling out there as well as  many Long-snouted Flipper Dolphins  seen along the way to the island.

The food prepared at the restaurant by the beach where we snorkeled was local and authentic. It was quite nice but lacking in creativity and flavor if compared with Thai cuisine.
One nice restaurant was found at Bohol Bee Farm where they served very nice pizzas.
Cold beer was readily available and much cheaper than in Thailand. St Miguel premium lager was my favorite.

On two mornings my friend drove me to Rajah Sikatuna forest reserve.  It took an hour and a half to get there on a two lane road. I found all the info I needed here: http://www.birding2asia.com/W2W/Philippines/RajahSikatuna.html

I only stayed 2-3 hours each morning which surely wasn’t enough. Still I got a feel  for the place and best of all achieved my goal of seeing  Azure-breasted Pitta (Steere’s).

I had company with Sinoy, a ranger, during my walks. He didn’t speak much English but knew the major birds (Ryan is a younger chap that speaks English but the Sinoy is the one that knows the birds).  He pointed out a nesting Philippine Frogmouth and promptly took me to a spot where he said: ‘ play the Pitta call’! The bird came in like a rocket , taking me by surprise and thus I missed a marvelous opportunity for a close frontal shot.

The 2nd sighting I heard the bird calling while walking a trail and taped it in again though the bird remained further away then the 1st  one.

Other target birds were Philippine Trogon. This one was pretty easy to find as it called a lot.
Rufous-naped Kingfisher eluded me inspite of calling loud. Not interested in playback.

Along the river I saw a pair of Silver Kingfishers but didn’t have time to wait for them to pose for a picture.  It is a fantastic looking Kingfishers and a must bird when in Bohol.

In general the birding was quite slow compared to what I am used to in Thailand. The small and common birds were difficult to see and I did not encountered  a single bird wave.

I am sure I would have connected with a lot more birds if I had invested more time in the park.

A big bonus was a Philippine Flying Lemur on a day roost.

At the Chocolate Hills I had a couple of Pygmy Swiftlets flying around at eye level. Very clearly defined white rump. Unfortunately my back up camera (my 7D with Canon in Bangkok) has a problem with the shutter release so  I struggled with images. Managed only one half decent one but to my surprise I can’t find any shots of this bird in flight on the Internet.

Back in Cebu city friends took us on a midday outing to Mountain view, a scenic spot near the city.
I walked around the landscaped parkland and saw about 10 species of birds but nothing I hadn’t seen.

On the way back we spent a day in Manila with friends.  Manila make Bangkok seem organized and almost civilized!

As for the birding aspect to our vacation I learned that there are very few birds around and one needs to have a rather direct approach to the known birding sites in order to see what there is.

In the end I did get 12 lifers and some good ones at that! 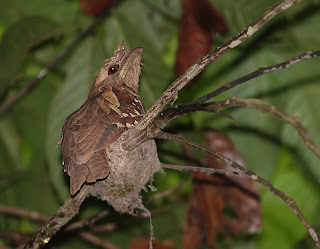 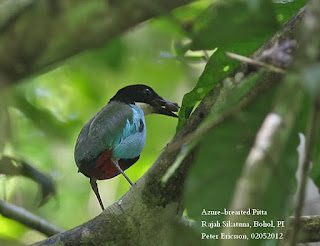 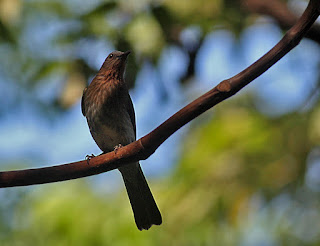 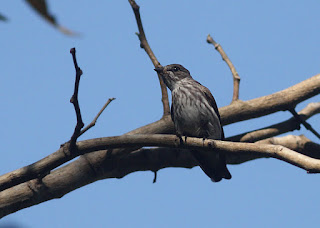 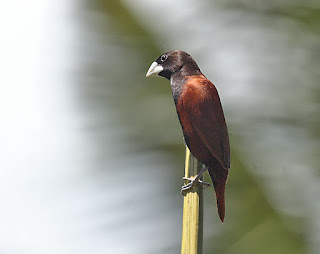 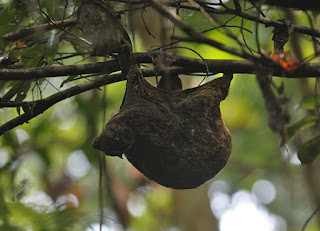