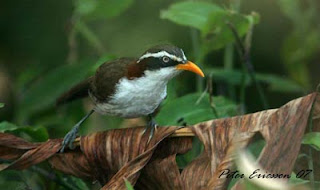 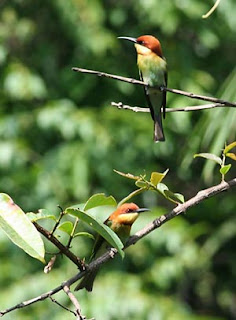 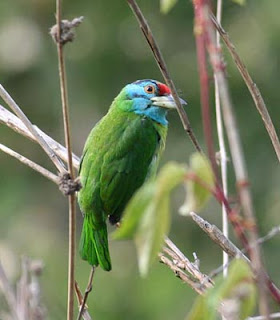 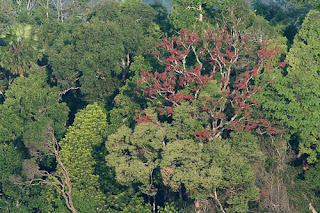 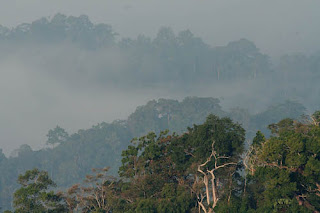 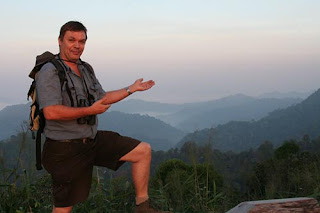 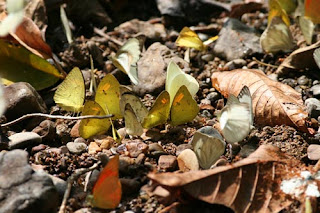 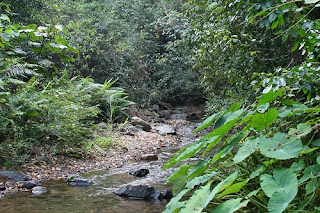 It finally worked out for me to bring my wife, kids and fellow co-worker to Panernthung, Kaenkrachan National Park for an overnight stay. The cooler weather and promised sea of cloud formed in the early morning enveloping the forest and surrounding peaks was what determined this trip.

First stop after a rather lengthy drive was the 2nd stream at km 16.

It isn't really butterfly season yet but there were enough dancing flowers around to excite little eyes!

The transparent fish in the stream were very happy for a handout of bread crumps.
Kids asked: 'How did the fish get up here?' 'They stayed on the mountain after Noah's ark was stranded in the Flood and the waters receded, is what the Bible teaches us' was my reply.


Seeing it was Sunday the campground at Panernthung was not crowded. We chose our spot
with some great views overlooking the rolling mountains leading into Myanmar.
Up here one can sense the vastness of Creation and how it was meant to be 'once upon a time' before man started messing it up.

The afternoon was spent playing, birding, eating, relaxing, talking and enjoying our wonderful setting. The only thing that spoiled our total peace was a gang of young men camping out near to us. They had been told not to sing, play guitar or tape players by the rangers. Instead they resorted to talking, giggling and insane laughther througout the night. A real 'Devil's pest' in the middle of God's Garden.


The Mountain Scops Owl kept calling for hours but inspite of repeated playback wouldn't come in for a show. Still need to see this bird.

The next morning we drove down the bumby and dusty road with our van. No other vans up here, only 4 WD's. On the way out we bumbed into Pinit and Nang leading a group of foreign birders.

Back at the Dam we stopped for a picknick lunch and headed to Chaosumran beach at Petburi. Kids got to play in the ocean, walk in the sand and smell the sea. Me? Had a cold drink and enjoyed the Common Terns feeding nearby.

Then we drove to Lampakbia Mangrove reserach station. Lots of birds in here as they don't use pesticides. These good sized birds caught everyone's attention.
Posted by Thaibirder at 8:06 PM No comments: 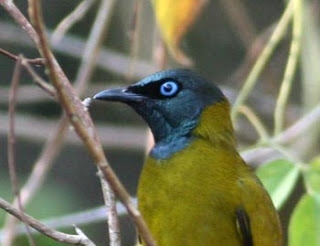 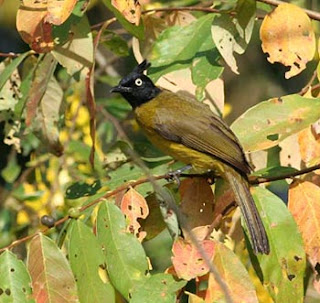 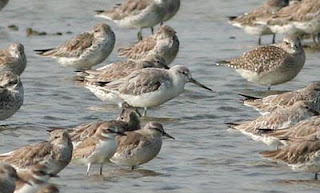 What an unusual way to end the old year and to begin the new! Birding at Lampakbia and Kaengkrachan. Kim Chua, an oldtime friend from Singapore whom I initially met at the mangroves of Pasiris park, came up with his family. Both of our families agreed to let us go, God bless them!
Target bird for Kim was Nordmann’s Greenshank, Giant Pitta, Bar-backed Partridge and a few odds and ends.
Lampakbia was a delight as usual. Full of waders of all sorts as well as open country birds. In a flock of 300 Great Knots with some Red mixed in we found a few Nordmann’s. These are such neat looking birds and once learned not really to be confused with Common. After a couple of hours in the area getting our heart’s content we had a sumptuous meal by the beach.

Kaengkrachan was totally packed out with New Year’s revelers and we were denied entry to the park. Instead of giving up we went to the first checkpoint from where one can pay the entry fee as well. Same story, entry denied.

Waited awhile until the chief of the park came around, explained the situation and allowed us in to where the sealed road becomes a dirt road. Atleast we had fun looking at some more common smaller birds along the roadside.

There is a smaller resort about 1 km before the checkpoint where we camped out for the night. While dining the news of bombs going off in Bangkok came on TV. Whoever was behind it seemed to achieve their goal as most people in Bangkok went home after that.

There is a lot of power in fear something realized not only by terrorists but also big governments and used in manipulating the masses.

Following morning we were let in. Arrived at Bahnkrahng early on to see A LOT of vehicles start their drive up to Panernthung for sunrise. In Thailand people love waterfalls as well as seeing the sunrise. I guess many want to see the sun come up giving light and a new day and that would be symbolic of a New and better Year.

We quickly started our birding around km 16-17. As usual it was quiet and much more heard then seen. We used tape to see if we would get any feedback from the Giant Pitta seen around here last year. After crossing the stream and finding the trail that goes inside the forest we stayed put for awhile trying our luck. No Giant Pitta to be seen but instead a Blue Pitta came foraging for a couple of minutes to give good views.

Later, a Giant Pitta did respond once but was never to be seen. Perhaps it came to have a look at us and decided against an appearance?

Out on the road I heard something scratching the ground. Only 2 meters from me a Bar-backed Partridge suddenly froze in its tracts. This was Kim’s second lifer and he was very delighted. Other birds seen in here was Tickelli’s Hornbill (Brown), Sulphur-breasted, Plain-tailed and Pale-legged Warbler (lifer for Kim).

Around noon we headed out of the park and had another delicious meal at Gang Pet restaurant by the dam. Best food around!
Posted by Thaibirder at 10:18 PM 1 comment: 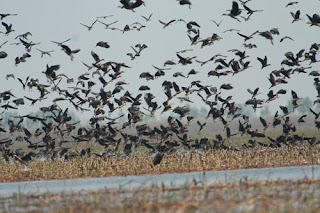 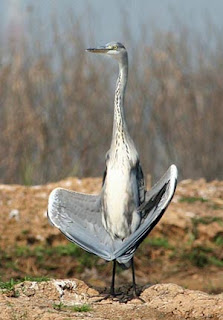 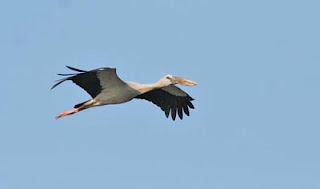 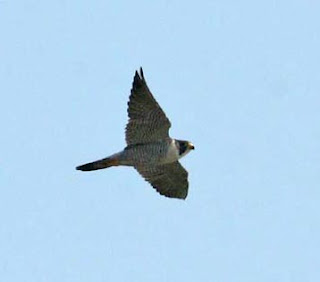 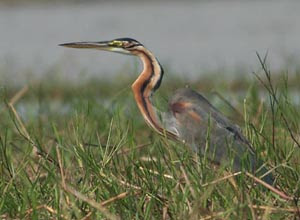 Got a call from Philip Round in the afternoon on the 8th. 7 Grey-legged Geese had been seen at Beung Borapet, Nakorn Sawan since the 6th. Obtained permission from home to go along. Got to the place in the evening and stayed at the research station for waterfowl. Simple lodging.
Up early with a couple of people from the station who took us to where the birds had been seen. Unfortunately there were quite a number of farmers in the area and no matter how hard or long we tried we failed to find the geese.
Instead we saw huge flocks of ducks in the air. About 3000. Pintailed Duck, 3000 Gargeneys, small number of Eurasian Wigeon (2), Northern Shoveler (3), Common Teal (2) and presumably 1 Ferruginous Duck.
There were literally hundreds of Grey Herons around the lake. Maybe 4-500. Purple Herons were common, Purple Swamphen (100), 20000 Lesser Whistling Ducks flew up from floating vegetation as we drove by in a boat. Quite some site. Cotton Pygmy Geese were inbetween the Whistling Ducks. A few Spot-billed Pelicans was a great site to behold. A flying female Painted Snipe gave good views. A Peregrine Falcon worked its way across the wetlands. A single Eastern Marsh Harrier sought out prey in the fields.
Striated Warblers could be seen and heard with their musical songs. The whole lake was teeming with birds. Openbills, Jacana’s, Cormorants etc, etc. I must get back up there sometime. A consolation price was that I was able to tick off Common Coot for my Thai list.
It was a great opportunity for me to learn from Philip as he helped to sort out some Reed Warbler calls I was unclear about. Thank you!
Posted by Thaibirder at 9:35 PM No comments: 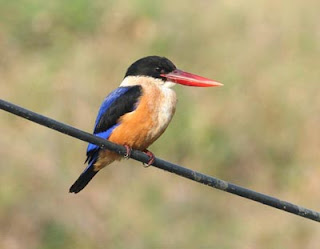 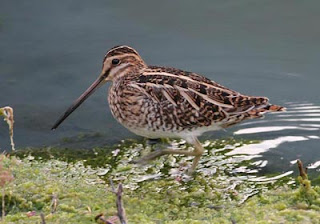 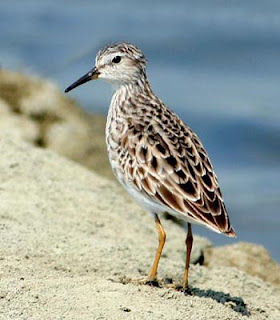 Bengt Legnell, another oldtime friend from Sweden had arrived a few days earlier. He was waiting for a team of Swedes he’d guide around mid January so I thought I’d like to take him out to brush up on some of the local birds.
We decided for a day at Lampakbia. This truly is a great area where one can be watching birds uninterrupted and continually. Higlight was the Greenshanks again but we failed to find any Spoon-billed SP normally seen in the area.
In the late afternoon we searched hard for this bird at Khok Kham but dipped again.