Central and North, one on one! 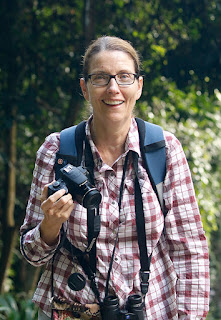 No trip is ever the same. Now why is that? Mostly because of the people involved as we are all so different. Of course there are such things as weather, seasons and bird activity but mostly what colors or makes a good trip is decided by the contentment of the birders themselves and not necessarily what has been seen, strange as it may seem to some.

This trip was in the making for a long time. Kelly Morris from Los Angeles is a very keen botanist turned birder. She badly wanted to see Spoon-billed Sandpiper which is what spurred this 8 day long birding adventure.

I picked up Kerry at her downtown hotel and we arrived at Pak Taley around 7 am. The conditions always vary at the pans and with somewhat weird weather for this time of year the pans were filled with water making it hard to find any small shorebirds. It took well over an hour to find the Spoonie and it wasn’t until the 3rd time we found it that it stayed around for prolonged views. Distance was far but it was seen well in the scope. We watched the bird for half an hour. It was preening and sleeping. Water level being too deep for any feeding.

We also took time to go through all the many other species of shorebirds  and it must have been a bit overwhelming for a birder from the US not having seen peeps outside of the Americas. A great opportunity to study and learn.

And, yes, we did get the other rarities such as Nordmann’s Greenshank and Asian Dowitchers.
Normally I would visit the sand spit for White-faced Plover, Malaysian Plover and Chinese Egret but since our schedule  looked rather compressed we choose to spend the afternoon at Lung Sin  feeding station. This proved to be a good move as we got to see 23 forest species come to bathe and drink. All new for Kerry.

When visiting Kaengkrachan I almost exclusively stay at www.baanmaka.com The resort has new ownership and some improvements as a result. The garden is as impressive as usual and Kerry with her interest in plant life thoroughly enjoyed it. Actually I didn’t hear a negative word about the birding throughout the whole trip. If there were no birds around Kerry immediately went for the plants photographing both birds and plants as we went along.

The weather was appalling for this time of year with drizzle and dark clouds over the park. So instead of going straight in to the park we visited another feeding station to see some birds we had not seen from the day before and then we stayed outside and enjoyed the more open areas which still had birds in view. Late morning around 10 am we entered the park and though we didn’t get the early morning activity we still got to view a pair of Great Hornbills feeding in a fig tree along with many Pied Hornbills. Also an Orange-breasted Trogon was a great delight as it is a true tropical bird.

It was weekend and lots of campers. Some idiot had snuck up past the check point with his sedan and then proceeded up to the very top of Panern Thung. This resulted in a ban for sedans to drive past the campground. Normally I would drive to the streams a further 1 km away but with drizzle in the air we decided not to do the walk but to slowly go back out of the park and enjoy the garden of Baansongnok feeding station.

To get to the top I always hire a 4WD with driver. Early pick up and off we went after a breakfast of toast, eggs and fresh coffee.

It is a long drive to the top but once up it is totally worth the dramatic scenery with mountain peaks as far as the eye can see, tree covered hill sides, Gibbons singing and birds joining in.
We found a place for ourselves away from the crowds. Most locals go up to see the sun rise and then head down at 9 am leaving the place just about empty.

Birding was a bit slow but that was not felt by Kerry as she absorbed all the sights and sounds.
I like to point out the sounds I hear to help birders understand what is in the area. Hearing the birds does not mean you automatically will see them as some seem to think. It is much more to create an awareness of the richness of the surrounding and what we have a chance of seeing as we bird along.

A day at the top also gave 2 new primate species in addition to the Stump-tailed Macaques and Dusky Langurs  from the day before: Banded Langur and White-handed Gibbons! Behind the restaurant there was a Yellow-throated Marten roaming about in the food scraps.

By now, Kerry had already started to enjoy some of the spicier Thai dishes. Just lovely to eat a warm cooked meal at the top full of flavor!

We discussed our many options for the following morning and it was decided to go back to Paktaley for the Spoonie.  A very wise choice I think as one never knows how much longer it is able to see this beauty. Flexibility in the schedule is a great with customized trips. Well, the weather had resulted in some heavy flooding with sea water levels higher then recorded in many years. We couldn’t find the Spoonie but instead got on to many other birds in the hinterlands adjacent to wetlands.

A midday flight to Chiang Mai went well where we picked up a rented vehicle and headed to Doi Inthanon, Thailand’s tallest mountain.

We headed strait for Daeng’s Homestay, halfway up the mountain after we had our supper at the dining area by headquarters.

First thing in the morning we headed up to the Summit. Oodles of people and cars. Birds are still present but not immediately seen. They prefer some light and warmth. Still, the area is great for people watching, plant watching and a cup of coffee.

We spend a few hours in the area and got on to many of the birds found there. Doi Inthanon is still a must on a Northern Thailand itinerary but I am cutting back on time spent on the mountain as it simply has way too many tourists in the dry season.

We visited 2 waterfalls on our way out of the park and did the rather long drive to Fang, North of Chiang Mai.

As it was Saturday we settled for Doi Lang. Doi Lang is simply the best place for birds in the North and still without too many people around. However it was misty and hard to see birds. We fortunately got on to a birdy area around the 2nd checkpoint and there the birding started in all earnest. Ultramarine, Slaty Blue, Slaty-backed, Sapphire Flycatcher, Rusty-cheeked Scimitar Babbler, Siberian Rubythroat, Spot-breasted Parrotbill, Giant Nuthatch, Spectacled Barwing, Crested Finchbill, Oriental Hobby, Mountain Bamboo Partridge, White-bellied Redstart and Gold-throated Barbet was some of the birds seen.

We know it would be crowded at Doi Angkhang in the early morning so instead we set out for the fields of Thatorn. This was a smart move as we added about 20 new species for the trip and the fields kept us busy with our bins.

After that we drove up to Doi Angkhang where people were still about but many getting ready to head back home. At the feeding station birds were waiting. Instead of the lone White-tailed Robin from the week before we now also got to see Black-breasted Thrush, Rufous-bellied Niltava and Hill Blue Flycatcher. All these birds at close range.

At the border point of Nor Lae village Kerry got to shop strait from the hill tribe community as she wanted to bring stuff back home for some charity work she supports. We did support the shopping with excellent views of a stunning male Daurian Redstart.

Lunch in the village and then a scenic drive along the spectacular mountain range that separates Thailand from Myanmar.

In the late afternoon we spend an hour eagerly waiting for the renowned Spotted Eagle Owl that supposedly shows at Doi Chiangdao. But, nix, only an Asian Barred Owlet for us. Grr!

A lovely breakfast with homemade bread and jam plus fresh coffee at Malee’s Resort. Her garden is simply full of plants and even host a collection of 900 orchids. An amazing plant paradise!

The morning hours were spent in the tranquil surroundings at the temple that nestles itself in a ravine…..the steps up to the temple are adjoined by wonderful rocks and vegetation.
Some new birds for the trip and then off to Chiang Mai airport.

I was very happy that Kerry took to the Thai food (I love making sure the trip is a culinary one as well), loved the plant life, showed interest in people and culture and was very keen to get on to the birds.

We departed ways at Don Muang airport in Bangkok.

It was a great trip!

"Peter, Thank you for making my dream a reality by helping me see the amazing Spoon-billed Sandpiper! You have been a wonderful, patient and often hilarious guide! Your knowledge has enabled me to see so many amazing birds, and such beautiful parts of Thailand. The whole trip has been fantastic!
I look forward to the list you've created to see just how many things we saw and heard [ I know it is a lot!
I have so many beautiful memories of birds, plants, places, views, food, people and drives. Thank you so much!"
Kerry Morris


Posted by Thaibirder at 1:02 AM No comments: