Every season seem to play out differently. Freelancing as a bird guide has many benefits. I get to go on all kinds of trips ranging from short day trips to 2-3 weeks long with groups of 10-12 persons.
Through all of that one has to learn to adapt to the many different styles of birding. Learn to take each person where they are at and how to add value to our time together.

In December and January I have done several 3 days tours. One might think this is short but it is simply amazing how much can be seen and experienced in such a relative short time.
It is especially exhilarating for a 1st time visitor.

So on my last 3 day trip I went to pick up Orjan Larson, 71, and his 26 year old son, Jonatan.
Orjan was clearly excited as we met and freely shared his life with me as we drove from Bangkok towards Petchaburi. Orjan is a professional musician with a lifelong passion for birds. He had only birded once outside of Sweden prior to this but said he was highly motivated for a visit wanting to see Spoon-billed Sandpiper before it was too late. His son, Jonatan, is also a professional musician.
Jonatan had not been birding for several years but throughout our time together showed a keen interest. It was good to see father and son together in this manner.

We arrived midday to Paktaley and so decided to put our trust in the late afternoon for the Spoonie seeing it was high tide all day. Still we gave it a go and lo and behold the Spoonie gave a good appearance. During high tide the waders roost and feed on the salt pans as opposed to the mud flats during low tide.

We kept seeing birds right and left and most were new for Orjan, thrilling his senses. As with most Swedish birders Orjan had a great appreciation for vocalizations and was often referring what he heard to similar sounds from his birding in Sweden. I was very happy to brush up on my Swedish.

Before lunch we did a brief stop to look for Asian Dowitchers and thankfully found a handful mixed in with Black-tailed Godwits.

The visit to the sandspit of Lampakbia went all well. I forget how exotic it must feel for a 1st time visitor to sail through the mangroves, watching the colorful local fishing boats and experience the tropical heat. At the spit we soon had viewed our targets: White-faced Plover, Malaysian Plover and Chinese Egret.
We got back to Paktaley around 16 pm and this time were able to spend long time in very good light with 3 different Spoonies. What a joy it was! We still managed to change location to view Nordmanns Greenshanks and these rare shorebirds also gave good views in the late afternoon light.

A good day ended with a delightful dinner at the ever so pleasant Baan Maka resort near Kaengkrachan National Park.

Day 2. There had been a slight drop in temperature and that along with clear skies invited us to a splendid morning. We simply parked ourselves at a hot spot and waited for birds to show. And show they did. Pied Hornbill, Emerald Cuckoo, Black-naped Oriole, Asian Fairy Bluebird, Black-thighed Falconets, Coppersmith Barbet, Black-crested Bulbul, White-throated Kingfisher, Grey-faced Buzzard, Thick-billed Pigeon, Chestnut-breasted and Green-billed Malkoha to name a few.

As the day progressed we went for a walk in the thicker part of the tropical forest where butterflies are in abundance. Birds tend to be more scarce in here but each one is unique and so Brown Hornbill, Sultans Tit and Scarlet Minivet led the way for new exciting encounters.

After a solid lunch inside the park we decided to leave the park for an experience at a permanent feeding station. We had booked ourselves at Baan Song Nok and found us in the blind by 2 pm.
Watching birds at close range and with prolonged views is always special. About 15 to 18  species graced us with their prescence. Barbacked and Scaly+breasted Partridges, Lesser and Greater Necklaced Laughingthrushes, Black+naped Monarch, Racket+tailed Treepies etc.

At around 5 pm we had seen the often late visitor Siberian Blue Robin so we felt we could leave the blind in favor for some birding along the road.

It so happened that a large flock of Starlings had been seen in an area 5 minutes from where we were so we went there in hope for some good views.
A couple of hundred Chestnut-tailed Starlings was good but a handful of Spot-winged even better….however the best was a lone Chestnut-cheeked Starling which was a new bird for Thailand for me.
Another sumptuous meal with cold local beers followed. It is always fun to dine with people that appreciate the many flavors found in the Thai cuisine.

Day 3. We started out the morning birding along the access road to the entry point of the park. There are some very good scrub and open country birds here. After that we went back to bird at the grounds of our hotel which also hold a good number of birds.

Lunch at a restaurant by Kaengkrachan dam never fails to hit the spot.

Orjan and Jonatan were to meet up with David at Kor Chang the day after so we drove to Suwanaphum Airport where taxis are easy to get.

We recorded almost 180 species. List is available upon request.

It had been a fun loving 3 days for all of us. 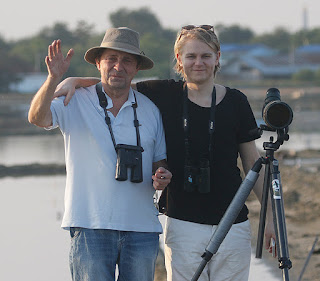 Posted by Thaibirder at 12:34 AM No comments: