May 24, 2021
Butterflies!
I think we all know that no matter how difficult the circumstances are there is always a silver lining somewhere.
With the world gone mad I started to focus my attention to birding sites near home. I got to be more thorough in my immediate surroundings. My lists for Bangkok and Chonburi i.e. grew substantially. I did manage a couple of longer trips when restrictions were let up a little.
That made me grateful for the things that sometimes have grown too familiar.
Then something inside of me told me to turn my focus towards butterflies. I have seen almost 900 species of the birds in Thailand, photographed almost 800 and recorded the sounds of many hundreds. Meaning that newness is harder to come about. But butterflies I know next to nothing about except that they are very attractive in an artistic way. I have from time to time taken the odd image but was intimidated by the lack of knowledge on my own part and simply brushed it aside as too much of a mountain to climb also having felt that the birds were challenging enough.
Then I got my hands on a monumental Butterfly Guide of Thailand of about 1000 pages. I looked at it but again was massively intimidated. Ha! So, it set for the shelf for a year collecting dust.
Well, the pure beauty and variety of the butterflies started to grow on me and I started to set aside time for the butterflies after a couple of hours birding in the early morning. Butts like to be active a little later when the sun is out and it is warmer.
Along with that I discovered www.norththailandbirding.com to be a wealth of information and with the generous help of Dave Sergeant I started to grow a collection of images. Mind you, identifying these things is almost a nightmare at times. I would say at my stage considerably more difficult than birds.
So, at this point, I am very happy that I have been able to focus more on the butterflies, to expand my repertoire and versatility.
I like keeping lists but I also enjoy the sheer beauty and intricacy of the patterns on the butterflies. Also reading up on the biology and life stages of butterflies is simply fascinating. A great site is found here
https://butterflycircle.blogspot.com/
So, all this to say, I am still very much interested in birds and always will be but for the time being the butterflies offer a lot more in terms of newness. Once the borders are opening up and it is possible to travel again things will need to be readjusted but I know the butterflies will have much more of an interest for me no matter where I go from now on.
Learning about something new and complex like butterflies is a bit like learning a new language. You simple can only learn one word at a time!
www.pbase.com/peterericsson/butterflies 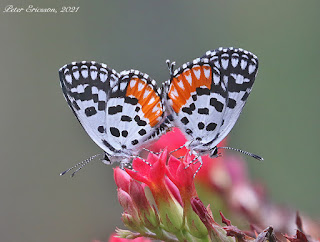 Popular posts from this blog

August 06, 2020
Huai Chorakhe Mak 5/6 th August, 2020   I started birding too late to see a Sarus Crane in the wild in Thailand. But then in 2011 a group of birds were released into the wild in a wildlife sanctuary in Buriram province. Since then additional birds have been released and the birds have started to breed producing a number of offspring. Currently there are about 110 birds spread out in the province.   The area of release is called Huai Chorakhe Mak,   5 hours drive from Bangkok. I have held off a visit until now as I didn’t   want to drive so far for just one bird. But now I felt the time was right and so it turned out to be.   I did spend a night and did some birding at Sap Sadao to look for some birds with a preference for dry dipterocarp forest. It was on the slow side but Paul Farrell came down from Khon Kaen and it was fun to do some birding together. It took me 4 hours to get to this site then the following morning another 2 hours to Buriram.
1 comment
Read more

Birding trips out of Bangkok!

May 23, 2021
Daytrips out of Bangkok The following are a few sites that I regularly take visiting birders to. I often do one site in the morning and another in the afternoon and sometimes even fit in one midday.  Depending on the time of year number of birds seen will vary. Most migrants are here from September – April yet there are others that only visit in May-August.  I find it very fulfilling for people on business or others with limited time circumstances to invest in a guided trip with someone that not only knows the birds but also how to get around and has years of experience living in Thailand. Fields of Latkrabang, Bangkok: My local patch and a gem in the city concrete with still rice fields and scrub present. The roar of the traffic in the background and airplanes lifting to the sky is subdued a bit and the birds present are clearly heard. Many a good wetland birds as well as warblers and other birds have been recorded. On a normal morning I average 70-80 species.
Post a Comment
Read more

May 29, 2020
The first really long rains kept falling through the night making me decide against going out this morning. But after rains birds sing! First one as usual is the ever so noisy Asian Koel. I don’t think there is a single birder that doesn’t know it by sound. The distinctive whistles of Malaysian Pied Fantail follows. We have a resident pair in our garden and it is always fun to watch these little buggers hunt insects. The Eastern Jungle Crows, (Large-billed Crows) fly over our house in the early morning and some of them make a little stop on the rooftops or trees across the road. The loveliest singer of them all starts singing really early. Magpie Robin whereof we have several pairs in the immeditate surroundings. They often come for a drink of water or on the lawn to look for grubs. Greater Coucal is also mostly active in the early morning and you can hear its low pitched booming call. It must be a master of disguise cause as large as it is and as common as it is
Post a Comment
Read more

Thaibirder
Bangkok, Thailand
I have lived in Thailand since 1982. Started my birding around 1990. I have managed to see 893 and photographed 740 of the birds of Thailand, something I am ever so grateful for. Photography is my hobby and an area I hope to grow in. I am very happy to show you the wonderful birds in Thailand. It is something I enjoy very much. Peter pkknjj@yahoo.com