Today turned out to be a bit of an extraordinary day. It started out with me not feeling very motivated in any particular direction so I decided to leave a little later and mainly get my steps for the day in at a nearby park.
I went to King Rama 9 Park. A leisurely walk and birds started building.
I caught eyes on a Thai girl with binoculars but not dressed as a typical birder
(you know the one in birding uniform)….
I thought it would be nice to say hello but then I got distracted by a flock of Small Minivets.
Then the girl and her friend came running towards me saying ‘on the wire, Emerald Cuckoo’!
Sure enough, a splendid male on the wire.
Both the girls were enthusiastic with a hunger to learn.
We looked at the Cuckoo for a bit and then turned towards a Yellow Wagtail and Paddyfield Pipit on the lawn. They hadn’t realized it was 2 different birds so a nice opportunity to point out a few things.
Rama 9 is rather landscaped but there is an area where migratory birds hang out and in that darker part I got on to Blyth’s Paradise Flycatcher, 2 Barred Warbler and Sakhalin Leaf Warbler.
As I decided to walk on, a sound not familiar was heard. A pair of Rose-ringed Parakeets were chasing each other for a couple of minutes and gave great views. My first pix of this invader/introduced bird in Thailand.
Once home I noticed that a friend had gone to twitch Indochinese Blue Flycatcher at Queen Sirikit Park. I thought that a bit weird as my friend has a very high list for Bangkok and I was wondering why he bothered to. So, I checked eBird and my own target birds for Bangkok. The bird was not on the missing species list. Hmm…but when checking my seen birds it wasn’t there either. Then I realized it simply wasn’t on the Bangkok birdlist at all and thus didn’t show up on eBird. I have in times past seen many blue flycatchers at my old house but didn’t correctly remember having seen this one or not.
So, another non brainer. I got to Queen Sirikit Park by noon and at the spot got the bird immediately! Yeah!
Then another friend wanted to show me some of the local owls and though not new for my lists it is always a thrill to see owls on day roosts. Got my 10.000 steps and more! 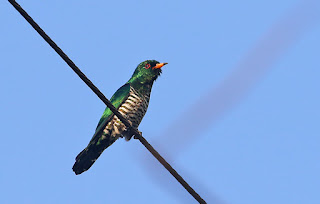